About Us > How we have helped so far > Andy

Nineteen years ago, ex-RAF airman, Andy, acquired a serious brain injury when he was knocked off his bicycle, leaving him with limited use of his arms and unable to walk.

Before his accident, Andy was a keen mountaineer who had scaled El Capitan in Yosemite National Park; but now he faced his biggest challenge yet.

Due to lack of appropriate care where he lived, Andy found himself in a nursing home for elderly people, without stimulation and the necessary therapy to begin rehabilitation. He began to deteriorate rapidly. Thankfully, his family found Care for Veterans and he was transferred to the facility in 2005.

With intensive physiotherapy, Andy made amazing progress. He regained some movement and improved his posture, and in the first few years of being at Care for Veterans, he had regained greater autonomy in daily life.

He became independent in accessing the local community in his powered wheelchair, and was frequently seen on the promenade heading to Worthing town-centre or to a chosen restaurant on good-weather days.

With the achievement of his personal goals he remained motivated to succeed in other areas; he hosted a weekly ‘Classical Music Appreciation Group’ for his fellow residents, conducted a presentation of his past mountaineering pursuits, and he also ran a weekly curry night in partnership with a local Indian restaurant.

Sadly, Andy became very ill and was hospitalised for a significant period of time and all the progress he had made had lapsed. After a long period of bed rest, it was time to start again, right from the beginning.

Andy is back to using his powered wheelchair and is often seen around Care for Veterans, taking himself to mealtimes in the residents’ dining room. Our Occupational Therapy team has worked with Andy to teach him to use a ‘grid’ system to aid his communication and help express his feelings. He also uses touch screen computers to play games, like Scrabble, and access his music collection.

The Occupational Therapists and Physiotherapists work on maintaining Andy’s dexterity, so that he can continue to do some tasks by himself. 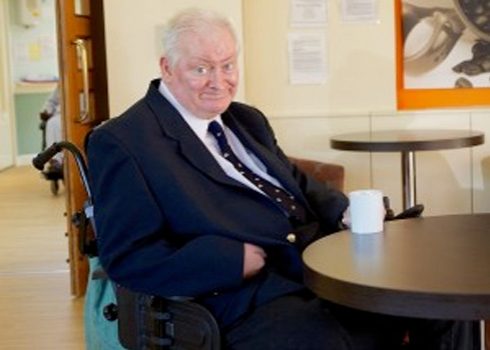