About Us > How we have helped so far > Doug

Doug quickly became our resident Care for Veterans photographer. He was often found around the grounds and at events snapping away and capturing great moments.

A former Flight Engineer and Air Gunner, Doug was called up to the RAF a year or so after marrying his wife, Brenda, in 1951 at the age of 20.

Doug explains, “I was called up just as the Korean War was ending, so most of our guys were coming home when I joined.”

“I took part in training exercises, flying in Sunderland and Shackleton aircrafts. We used to take gunnery practice at Chesil Beach, near Dorset. It was a well-known practice range for the RAF, but one time we flew over and there were crowds of people sunbathing on the beach.” Laughing, Doug continues, “Me and my colleagues decided to shoot blanks from our machine guns into the sea right next to the beach – I can tell you, the beach cleared pretty quickly after that! But we did get into a lot of trouble for it.”

Doug recalls another time when he and his fellow crew members made light of a situation: “We weren’t keen on our navigator. He was a bit of a know-it-all and felt he had to re-check all of our work before each flight! A navigator checking an engineer’s work? It was crazy and used to really annoy us. He used to inspect the tail and tail wings, so he had to jump onto the tail wings to see it. My mates got so fed up, they said ‘Right!’ and rubbed grease on the tail wing, so when he jumped onto it he slipped right off and fell 25-ft into the water!” Laughing out loud again, Doug said, “we got into trouble for that as well!”

His interest in photography started when he was 14 years old. He began by playing around with gaslight and lith paper, holding it up to the light to create various images. In time, it grew into a passionate hobby. He got a camera and began taking portraits of his children. He’d managed to smuggle a camera out of Gibraltar when on a trip there, but had to sell it when his son needed a bed.

“I just carried on taking photos, and when me and my mates used to go on fishing trips, I became the ‘official’ photographer.”

Doug’s wife sadly passed away 10 years ago, and his friends urged him to get out there, be proactive and take more photos: “So I did, and surprisingly, it really helped me deal with the grief. It gave me a reason to get up and get out of the house, rather than sit around moping. It really helped me.”

Doug came to live with us following a stroke at the end of 2017: “I went first to a home in Lancing, which was very nice, but they didn’t have any on-site facilities. My daughter started looking around and found this place, which has the physiotherapy department. It’s much better to have it in-house as it gives you a better chance of making some progress, and I like to have a challenge. All of the facilities here are great; it has everything, so my family don’t need to worry about me.”

Sadly, Doug passed away in January 2022. 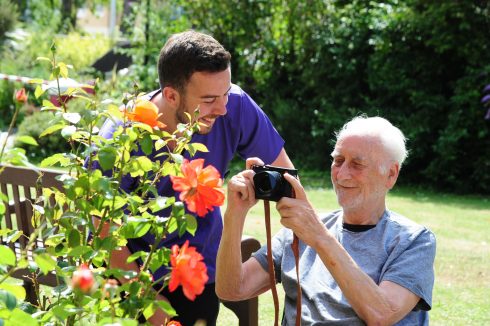