About Us > How we have helped so far > Irene

Irene (Rene) Curtis was born in Shoreditch in the East End of London in 1918, two months before the end of the First World War. Her father had served in the Army in the Boer War and her mother looked after Rene and her two brothers. When Rene was 17, she was at a friend’s house where she saw four men playing cards and one of them, a handsome chap called Philip Barclay, kindly offered to walk Rene home. It was love at first sight and they began dating. However, Rene’s mother did not approve as she did not like Rene riding pillion on Philip’s International Max Norton motor cycle and she made them split up. Rene was heartbroken, but a few years later whilst at the local cinema, she bumped into Philip; their relationship restarted and a few months later they were married in June 1940.

Rene remembers, “We married quickly because our country was at war and we did not know what the future held for us. We thought it was the best thing to do. We started married life in the first year of the war and Philip was initially in the Air Raid Precautions Service branch, but was then conscripted into the Army, joining the Royal Artillery.”

Rene became pregnant and their son, Philip Jnr, was born on one of the worst nights of the London blitz. Rene recalls, “I went into labour as the bombs were dropping all around us. It was dreadful and very frightening. There were no ambulances to take me to hospital so I had to go in a fire engine with some firemen. I was very scared but there was nothing I could do – in those days we just got on with it. Philip was born just as the all-clear sirens sounded – he must have known it was then a safe time to pop out!”

Rene saw little of her husband during the war but they treasured the times he came home on leave.  Thankfully, Philip returned home in 1945 safe and sound, having been awarded a certificate by Field Marshall Montgomery for ‘outstanding good service’, which Rene treasures to this day. After the war, Philip set up a second-hand furniture and upholstery business and Rene was a dressmaker, on London’s Oxford Street. They were a happy family but money was very tight in London, so when Philip retired they left and moved to Worthing.

On 5th November 1999, Rene received a telephone call that would change her life forever, when the hospital called to tell her that her beloved husband Philip had died. Rene never married again as she knew she could never replace Philip and she lived alone in their Worthing bungalow until she was 90, when sadly she suffered a stroke and was no longer able to walk.

As Philip had served in the Armed Forces, Rene qualified to come to us as we care for veterans and their close family members. Rene says, “When I came here in 2009 I was quite poorly and couldn’t do much, but I soon became better and now every day I get up, go to breakfast and then into the Social & Recreation room where the fun of the day begins. I like doing weaving which keeps me busy, but most of all I have a real laugh with the other residents, especially my best friend Ruby.”  Rene particularly enjoys the trips out on the coach from garden parties at Buckingham Palace to visits to Drusilla’s Animal Park. However, her favourite is when she and other residents attend the Remembrance Sunday parade in London and she wears Philip’s four war medals. Rene says, “I love it here. The staff are so friendly and I feel safe. There’s always something going on and I do like the music concerts when we have a good old sing-a-long, just like in the East End of London when I was a girl.”

Philip, Rene’s son, says that after Rene had her stroke, he was so pleased that Care for Veterans was recommended to him. He says, “This is definitely the best place for Mum to be. She gets the care that she needs as well as the physiotherapy and occupational therapy which makes such a big difference. It’s what I call a ‘comfortable, clinical environment’ in that Mum receives excellent care like she would in hospital, but in a very homely and friendly environment. Mum interacts really well with other residents and really enjoys her time here.”

Rene celebrated her 100th birthday in August 2018. A special party was held in her honour and was attended by her family, Care for Veterans’ residents and staff, and the Mayor of Worthing, Cllr Paul Baker.

Rene sadly passed away at Care for Veterans in December 2019, aged 101. 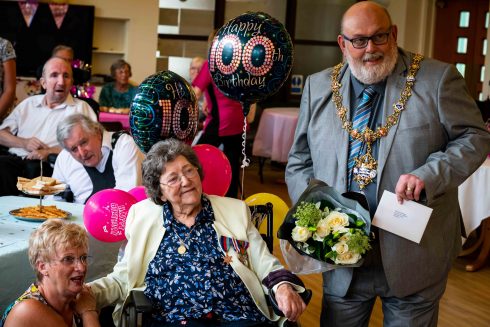