About Us > How we have helped so far > John

John joined the RAF in 1951. He was called up for his national service during the Cold War and served as an engineer on a Washington Bomber B-29 in RAF Watton in Norfolk.

Speaking about his experience, John said: “It was a complete culture shock – when you get into ‘square bashing’.” A term used to describe military drills.

He continued: “I was married by that time, and it was difficult leaving my newlywed wife as we weren’t allowed home that often. I was three years in the RAF, and I spent that time with the 192 Squadron. We were flying very near Russia to test to see if they could pick us up on their radar systems.”

The 192 Squadron was based at RAF Watton, Norfolk, as part of the Central Signals Establishment for Operational Signals Research carrying out an ELectronic Signals INTelligence (ELINT) role during the Cold War.

“It was a bit scary at times. One time, we lost an engine and had to limp back to do an emergency landing just outside Bagdad in Iraq. I was the engineer on board, and I had to repair the engine. When I think back to looking out of the window and seeing an engine misfiring over territory which is not very safe, I think ’crumbs’!  The amazing thing is that there wasn’t any fear! We were trained to do the job, and we just did it without thinking, really. We would fly from Watton in Norfolk to just outside Bagdad with 5,400 gallons of fuel onboard which took 13 hours 20 minutes non-stop. That was quite something in those days. This was all just before the time that Gary Powers, an American U-2 pilot, got shot down over Russia.”

Although that kind of experience definitely tested his nerve, he looks back with fondness of his time and has no regrets. He recalls some lighter times. “We used to make a trip to Malta to pick up wine and wristwatches for the girls. Then one day, we got diverted to Lyneham, which in those days was an RAF customs station, so they opened the bomb bay and ditched the whole lot in the sea – you could see it floating down! Another time, the crew asked me to fake an engine failure so they could land in Paris to go and see the Folies Bergère. So, we had some fun as well!”

When he came out of the RAF, John just got on with family life. He was building steam engines at Brighton Railway Works, where he started as an engineering apprentice. However, after that, he decided on a complete change of career.

John grew up in the war years and remembers King George VI declaring war with Germany. He said: “We were going to be invaded. My father sat us on the bed and said that tomorrow the Germans are likely to be here. I was about eight years old at the time. They were tough times, with bombers flying around in Worthing. It gave you that depth of character without thinking.”

On coming to live at Care for Veterans in October 2020, he said: “I arrived last October, but it’s all been in lockdown. I go down to physio, and I enjoy it; I do it as much as I can and try and keep fit. I’ve always kept fit, and I used to run for the county when I was younger. Most afternoons, I go down to the Wellbeing Hub to see what’s going on. I like to keep my mind active; although the body’s wearing out, the mind is still what it was!” 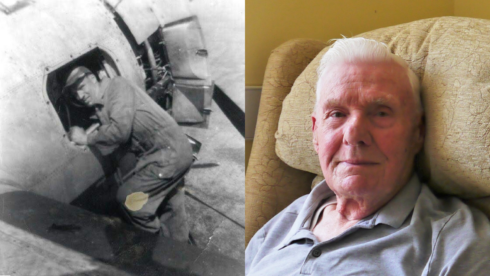