About Us > How we have helped so far > Michael

Dr Michael Matthews came to live at Care for Veterans in April 2010, having been living with Parkinson’s disease. His illness was making him weak and he was unable to walk as well as he used to.

Dr Matthews is a former Royal Navy psychiatrist. He joined the Royal Navy in 1965 where he began his medical training. He explains: “I was based at the Royal Victoria Hospital on the coast, near Southampton. Its purpose was to train army nurses and doctors, and to treat military patients. It was an amazing facility; huge liners used to pass by the hospital. You could watch them as if it was at the bottom of your garden. Huge liners, including the Queen Mary and the QE2, all making international voyages. I can’t tell you how magnificent a sight it was.”

Following his time in the Royal Navy, Dr Matthews continued his career in psychiatry.

“I completed my training at Wessex Regional School, then went on to St George’s Hospital in Tooting. I carried on well after I left the RN, and achieved consultant status.”

Care for Veterans was recommended to Dr Matthews when his condition had worsened and he needed additional support.

“The physiotherapy sessions are very helpful. I am toning up the muscles in my arms and legs, and try to walk when I can. The therapists are very encouraging, and they measure any improvement. I enjoy it.”

He also likes to go on some of the day trips, which are arranged by the Social and Recreation department.

“If it weren’t for Care for Veterans, I wouldn’t get the regular physio sessions that I need, or be able to go on day trips out. The staff here are wonderful; they take good care of me.” 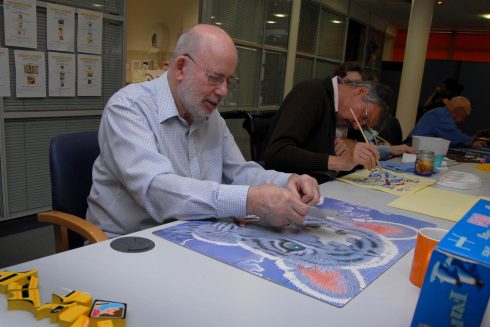