About Us > How we have helped so far > Mike

Lieutenant Commander Dr Michael Hutchinson, 83, is a former Royal Navy Officer. He served in the Navy for over 30 years, specialising in submarines: “I started at Dartmouth Royal Naval College aged 16 as a Naval Cadet. I intended to go to Dartmouth from about age three when my father was King’s Harbour Master of Bermuda dock yard. He served 45 years in the Navy, and my granddaughter is a Lieutenant today, so we truly are a Naval family!”

Mike’s long career in the Navy took him all around the globe, and he served in almost every submarine squadron throughout the world. During his time, he specialised in torpedo anti-submarine and diving, was acting captain of a frigate, and was on the first ocean passage of the UK’s first nuclear submarine, which travelled from Scotland to Gibraltar.

Mike explained: “After I got married, I was posted to a submarine in Australia for two years. We moved to Scotland for a while, then to Singapore for three years, so we travelled around a lot. I ended up in Plymouth, where I planned the submarine flotilla training exercises in Gibraltar.”

Mike wanted to leave the Navy while he was young enough to take up a new career, so, at aged 40, he went back to college and retrained for four years as a chiropractor: “I ran my own practice in Winchester for 30 years, in Jersey for four years, then went part-time working for different practices, and eventually worked from home.”

Sadly, life changed for Mike in December 2017 – he suffered a stroke, which left him with limited movement in his right arm and paralysis in his right leg, which meant he had to stop practice.

He explained: “My wife looks after me at home, but having done so for more than six months, I suggested looking into some Naval charities to see if there was any support we could get. My daughter found Care for Veterans, and it seemed like the perfect opportunity to give my wife a break. Having spent two and half months in hospital following my stroke, I wasn’t apprehensive about coming somewhere like this at all! The staff are all so nice.”

Being at Care for Veterans has allowed Mike to get out and about, thanks to the day trips that are organised as part of the charity’s social and recreation programme: “I got to go on the river boat trip on the Thames! It really appealed to me, obviously because of my background. During the day, I spoke to the skipper and told him that I’d love to have a drive of the boat. A short time later, he came to me and said, “here you go”, and let me take the wheel. I drove the boat for about two hours! It was fantastic, the weather was beautiful. It was a perfect day to be on the water. I wouldn’t have got to do something like that if it wasn’t for this place.”

While at Care for Veterans, Mike is also attending the on-site physiotherapy sessions to maintain some of the movement in his right arm and leg.

“I would thoroughly recommend such a delightful break to anyone in a similar condition to my own.” 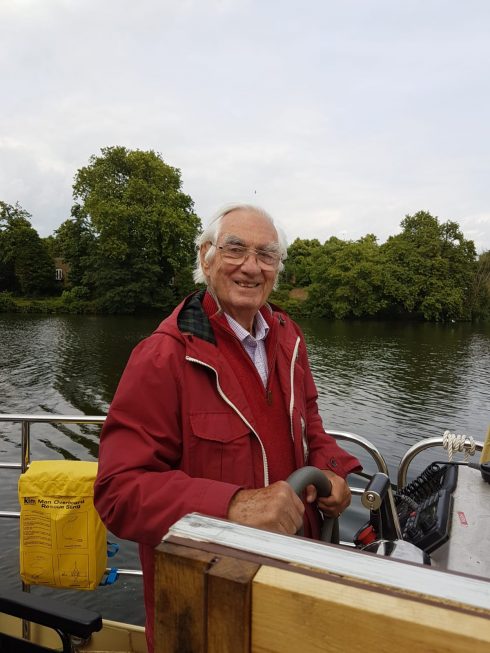