About Us > How we have helped so far > Steve

Warrant Officer, Steve Boylan, was born in Southampton in 1975. From a young age he wanted to follow in his father’s footsteps and be a soldier, joining the Royal Engineers at 17 years old.

His first posting abroad was to Kosovo as part of the peacekeeping force. Looking back, Steve says, “At 17 I could not vote or legally drink alcohol but was given a gun and went to dangerous places. I loved being a soldier and was excited to be in Kosovo where British soldiers were well respected. However, I was very young and on reflection it was very dangerous.”

As a Royal Engineer, Steve specialised in water and fuel supplies. He completed four tours of duty in Afghanistan at Kabul and Camp Bastion. Steve says, “Afghanistan was a real eye-opener. It was so dangerous and you couldn’t let down your guard for a moment or trust any of the locals, as even some of the children carried guns. IED devices were commonplace and I was so worried in case anything happened to me as I had two very young sons at home.”  Indeed, Steve lost two of his comrades who were killed in Afghanistan. Steve’s mum Mary adds, “Every time he was abroad we were so worried but that’s what military families go through and we just had to hope for the best.”

Steve was also posted to Sierra Leone to drill water boreholes to provide clean drinking water to combat the ebola virus. He took books, pencils and footballs for the local children and even performed magic tricks for them, earning the name ‘Juju Man’.

In his spare time Steve was an action man, becoming a Joint Service Mountain Expedition Leader and loved canoeing, mountain biking and snowboarding. He had a treasured Honda VFR 800 motorbike but one day, whilst driving back from the garage, life changed completely for Steve. A car knocked his bike from behind sending him head first into a van. The Air Ambulance performed an operation at the roadside to try to relieve the pressure on his brain, but sadly Steve suffered a severe brain injury which greatly affected his speech and paralysed one side of his body. Aged just 39, he was suddenly unable to walk and using a wheelchair.

After three years in different hospitals and rehabilitation centres, Steve arrived at Care for Veterans in December 2018. He came here to be with other veterans and because of the wide range of rehabilitation available to him. Steve says, “I love it here as we all share a common background. The physiotherapy is the best I have ever had – they give me goals to achieve and work me hard and my sons say they can already see a difference. Most importantly, the staff here have given me a new determination.”  Steve’s dad, Peter says, “Coming to Care for Veterans was the best thing to happen to Steve. For the first time we’ve seen a real change in his mental attitude and now have hope for his future. As parents who share this difficult journey with our son, we have also been greatly helped by the staff here. Pauline was fantastic with Steve’s admission, helping us fill in forms and supporting us every step of the way – we’ve never had help like this before.”

After just a few months here Steve says, “This is the best place I have been and there’s nothing I don’t like here. The food and location are great and the staff have really taken the time to get to know me as an individual. They even appreciate my strange sense of humour! They also make simple but important things possible – last week they helped me take my 10 year old son, Albert, shopping. It was fantastic because for the first time in three years, as I was able to be a dad again and do what dads do.”

Before coming to Care for Veterans, Steve was depressed and not making progress but the physiotherapy sessions are already making a difference and in time, speech therapy will improve his speech. Steve says, “Care for Veterans have given me a new mindset and the determination to succeed with my recovery. My goal is to get out of my wheelchair on my own and walk five steps before Christmas. I am determined to do this as I now appreciate that tomorrow is the first day of the rest of my life…”

It is only with the support of grant-giving organisations, such as ABF The Soldiers’ Charity, that we are able to help our ex-Army veterans like Steve. We are extremely grateful for their support in 2018/19. 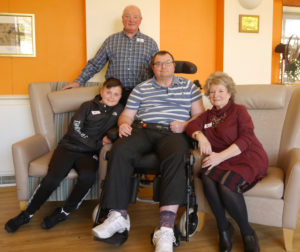 Steve with his Mum, Dad and son, Albert 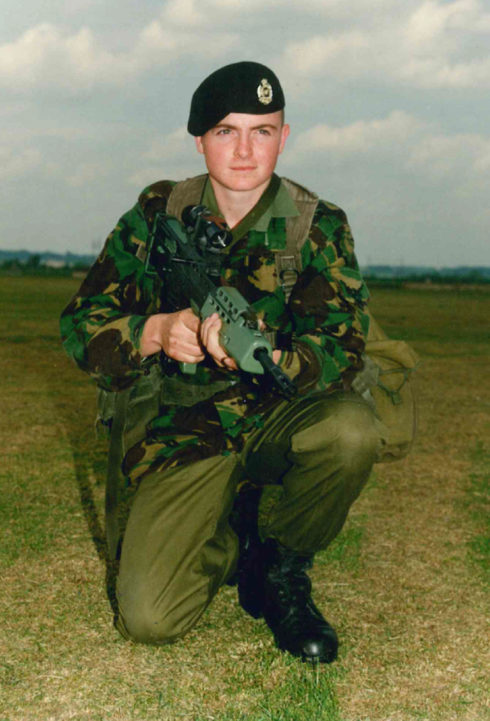