The Royal Navy and Royal Marines Charity (RNRMC) and Greenwich Hospital has awarded £66,500 to Worthing-based charity, Care for Veterans.

The Royal Navy and Royal Marines Charity is the principal charity of the Royal Navy. They exist to support sailors, marines and their families, for life.

Care for Veterans provides residential nursing care and rehabilitation to physically disabled ex-Service personnel, including those who have served in the Royal Navy and Royal Marines, and their immediate families.

This grant will pay for the comprehensive programme of care and rehabilitation needed to enable individuals to achieve goals for quality of life and independence. This includes physiotherapy, occupational therapy, and speech and language therapy, as well as a range of social and recreational activities offered by its Wellbeing Hub.

Born in Tottenham, Ray was a Gunnery Instructor and Deep-Sea Diver, and was a Chief Petty Officer by the time he was discharged in 1980. Ray loved being in the Navy and his family believe that he’d still be there now if he could! Ray was always intrepid, and one of his friends from HMS Mauritius described him as a “daredevil – the bravest man I’ve ever met in the Navy.”

Sadly, Ray’s life changed forever when he was involved in an accident while serving as a Deep-Sea Diver. He got trapped underwater, and by the time his rescuers managed to get to him, Ray had spent six minutes with limited oxygen. The lack of oxygen caused a brain injury, this left Ray with minimal movement in his limbs; he is unable to walk and cannot talk properly.

Ray’s daughter, Jacqueline, says that the facilities at Care for Veterans are just what her dad needs, and his family knew it was the perfect place for him. She explains:

“It is so important for Dad to live with other veterans. He loves being around people who have had similar experiences to him. He has regular physiotherapy sessions to help maintain his mobility, which is so important. He also takes part in the social and recreational activities, as he likes to make things. The nurses are really good, a lovely bunch. We couldn’t be without Care for Veterans. Dad’s in such safe hands here, so we don’t have to worry.”

Ray is very sociable, and his family are regular visitors. Ray’s condition means that he sometimes has episodes of neuro pain in his fingers and feet, but despite the limitations of lockdown, Ray has been able to maintain his current level of physical ability. He has been able to join in group activities, even taking part in daily wheelchair exercising sessions to music. These exercises are led by a physiotherapist and veterans form a large circle, taking it in turn to lead with their favourite move.

“Ray is a constant inspiration. He might have limited speech, but the twinkle in his eyes communicates so much. Ray’s life journey is incredibly challenging, but ‘daredevil’ Ray still has a zest for life. It’s an immense privilege to have this Navy veteran in the Care for Veterans family. As a facility, we are uniquely placed to provide a wide spectrum of nursing care and rehabilitation. Ray has complex medical needs, but like all our veterans, he has his own Personal Care Plan with agreed therapy goals. It’s all about helping Ray live the best life he can possibly live. Ray’s loving family remain deeply involved in his care and rehabilitation, but they also benefit from the help and support that’s available from our multidisciplinary therapy team.” 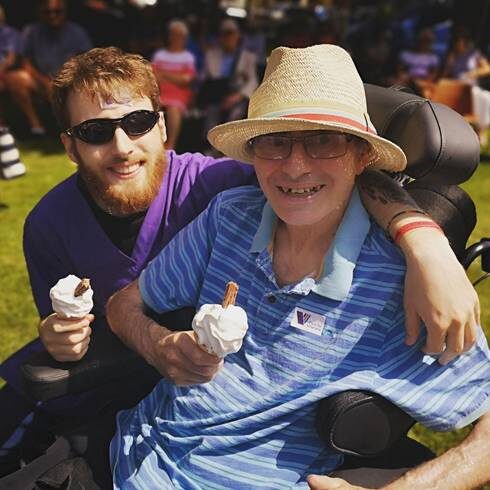