This summer, World War II army veteran, Peter Hawkins, 95, took part in a cycle challenge to honour the anniversary of the D-Day landings. He shares some of his experiences during that final push at the end of World War II.

Originally from Worthing, Peter was 18 years old in April 1943 when he was called up for Army Service. A year later, he was posted to the Royal Tank Regiment at Deepcut Barracks and found the battalion was in an advanced state of preparation for the imminent assault.

All crews had been allocated to tanks, but because I had only recently arrived, I was assigned to an American Half Track. These were used to transport spare crews.

When the time came to cross the Channel, I landed in France on the LST-325; they put the ramp down, and I landed on the beach. My first footsteps on the beach were with caution about mines, but I saw the Royal Engineers had already been there, putting their white tapes down to mark the mine locations. It wasn’t long before it was my turn to be called, to replace a crew member who had been lost in the battle.

I was a crew member in one of the tanks. I was seated next to a rack containing shells– high explosives and armour piercing. When necessary, I would move one these shells for loading. I later learned that one of these early operations was ‘Operation Epsom’.

I think one of the tensest happenings I experienced was when we had advanced into a salient* (*an outward bulge in a line of military attack or defence). It appeared that we were cut off, so there was quite a bit of tension because we didn’t want to becaptured, or worse.

Somebody produced an enormous Union Jack flag which was draped and secured over the tank, and we withdrew under this flag. There was very little enemy air activity, which was a surprise to us. The sky seemed to be totally dominated by our planes, and we didn’t want to be attacked by our own aircraft.

It was quite tense at the time. It was fortunate that somebody had that flag on board. I suppose our aircraft might have recognised us but maybe not? In that situation, we had no way of communicating with them, so we had to do what we needed to in order to feel safe.

There were other times, we’d been firing, there had been some firing going on, and I looked through my visor and looked out and just saw casualties on the ground. So many extremely unpleasant sights. There were many tense times when I thought my life was in danger, as we all did, but I came through it.

I survived through Normandy and throughout France, then I went forward as the movement travelled through Belgium, Holland and finished up in Germany, where I was when the war ended. I spent another two years in Germany before I was demobilised in 1947. Although the war had ended, I was still at work in the military unit.

Peter was recently awarded a belated ‘Legion of Honour’ by former President Francois Hollande, for “recognition of military service for the liberation of France”.

I always remember those whom I was with who now lie in Saint Manvieu War Cemetery.

After the war, I visited the immaculately maintained cemetery and found them. Standing by their graves, I immediately noticed the poignant date inscribed upon the stones. By the same time, I saw that their regimental numbers were very close to my own and therefore, we 18-year-olds were probably in the same intake.

As I stood by their graves, I was deeply saddened and thought, ‘I am standing here, and you are lying there.’ 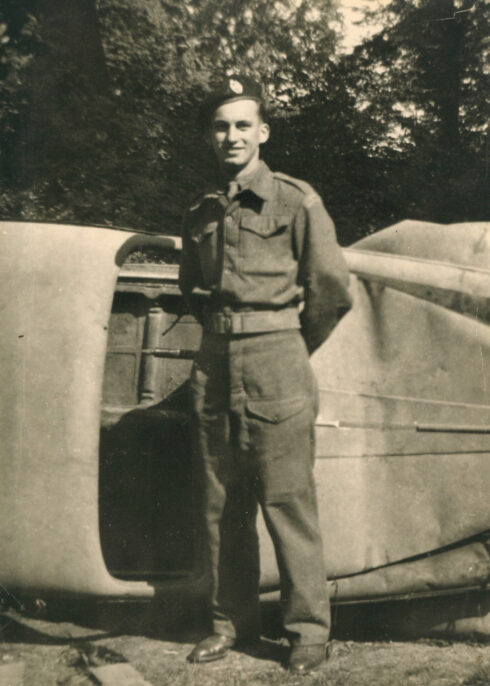