About Us > How we have helped so far > Ted

Current resident at Care for Veterans, Major Edwin ‘Ted’ Hunt LVO, is a World War Two Army veteran of the D-Day landings and the Battle of Narvik. After the war, he became a Royal Waterman and was appointed Queen’s Bargemaster in 1978. Ted retired from royal service as a Member of the Royal Victorian Order in 1990.

Born to be on the water

Ted was born in Canning Town on 20 March 1920. By the age of 15, he had begun his training to become a Thames Waterman, joining one of the last companies towing barges using a rowing boat! His father was a lighterman, and his family had been transporting passengers up and down the river since 1670. A great, great uncle had won the Doggett’s Coat and Badge Race in 1832, the ultimate bragging rights for anyone in the field.

Enlisting for WWII on Friday 13th

On 12 October 1939, one month after war broke out, Ted went to enlist in the Royal Engineers as a sapper waterman – a natural fit for the apprentice Thames Waterman. Initially turned away for being too young, Ted returned the next day and added a year to his age. The delay of one day proved to be a blessing in disguise, as Ted recalls: “I joined on the 13th, and I was sent to Norway. If I’d have joined on the 12th, I would have been in a different company killed on the way from Dunkirk.”

In April 1940, Ted was posted to the campaign in Norway as part of the 49th Infantry Division’s Royal Engineers, known as the Polar Bears. Tasked with taking the port of Narvik from the Nazis, his company was ordered to clear the snow from the fields in nearby Evenskjer for planes to land.

Each day, a single German Junkers 88 bomber would come over the mountains opposite the fjord, flying low overhead, it aimed and always missed.

On the day the airstrip was finished, another German plane attacked and hit the HMS Curlew, which was guarding Ted’s force. A squadron of German Bombers was seen approaching.

Ted says: “I thought I was going to die. I thought they couldn’t miss. But the Hurricanes came, and they began fighting. I saw two planes bought down.”

After Narvik was captured by the Nazis, Ted returned to Scotland and helped build military ports across the country.

By 1944, Ted was commissioned as a Captain and placed in command of 15 hardy Rhino ferries tasked with transporting vehicles to Gold Beach in the D-Day Normandy landings.

70,000 mines had been placed on wooden logs along Normandy’s beaches and by the day of the invasion on 6 June 1944, many of these had become dislodged and hitting them was a significant risk. Ted says: “The Rhino ferries were these amazing machines made up of 180 steel boxes. When they hit mines, they would only lose a few boxes and keep going.”

On the day of the D-Day invasion, Ted’s force departed for Gold Beach, and the first few hours were frantic. Ted says: “A lot of landing craft had wrecked by mines already,” he said. “Men had their eardrums burst from the noise. I could duck because there was lots of metal to shelter behind, but a shell splinter hit me in the middle of my forehead. Any lower and I would have been blind, any bigger and I wouldn’t be here.”

Designing a bridge for an army

During the last six months of the war in Europe, Ted moved into Holland to help the Second army find the best way to cross the waterways to Germany. Along with a Dutch Engineer, he would go on risky scouting missions to find the best places to cross. Ted successfully helped to design the longest floating Bailey bridge of World War II that crossed the Maas (Meuse) River. The bridge was 4,008 feet long and was opened on 19 February 1945.

After VE Day, Ted was promoted to Major and put in charge of a company before being sent back to London. He then prepared to take his company to Burma until the Americans dropped the atomic bomb. Ted was demobbed in May 1946.

In his later years, Ted taught navigation and watermanship at the City & East London College until 1985. As a Royal Waterman, Ted was appointed as the Queen’s Bargemaster in 1978. Upon his retirement from royal service in 1990, Ted was made a Member of the Royal Victorian Order (MVO).

Coming to live at Care for Veterans

Turning 102 in March 2022, Ted first came to Care for Veterans for respite care in November 2021. Increased frailty and living alone meant that Ted was now at high risk of falling. So successful was his short stay that he returned in December 2021 as a permanent resident. He’s still mobile and uses a walking aid to get around the site. Ted is a very sociable person, and his military background is a key part of his identity. Spending time with fellow veterans is very important to him. He’s no slouch with technology either and is often seen leaning on his walking aid in the corridor, taking a ‘Zoom’ call on his mobile.

How does Care for Veterans help Ted?

For Ted, being at Care for Veterans is about living in a respectful and safe environment. The dedicated care and support of the nursing team allow him to live with dignity, which enhances his feelings of well-being. This level of care means he can still access a wide variety of activities and outings – including the National Service of Remembrance at the Cenotaph in November 2021.

“The staff here cannot do enough for you. I am so well looked after, and it is a pleasure to meet fellow veterans.”

He also has access to Care for Veterans’ in-house physiotherapy and occupational therapy services, should he need them.

Ted can now choose from the wide range of daily activities and social gatherings organised by our Wellbeing Hub. And there are plenty of opportunities for Ted to enjoy the companionship of his fellow veterans; they often meet to reminisce and share their World War Two memories, as only veterans can. His days are now filled with stimulating social activities. Occupational Therapists in the Wellbeing Hub focus on creating the best quality of life possible for Ted.

James Bacharew, Head of Fundraising and Marketing at Care for Veterans, says: “Ted has quickly become a treasured member of the Care for Veterans’ family. It’s an honour to take care of a veteran with an illustrious career and such a fascinating story to tell. Ted has crammed a lot into his life, and that’s just what he continues to do at Care for Veterans. We feel privileged to be taking care of Ted in his 102nd year.” 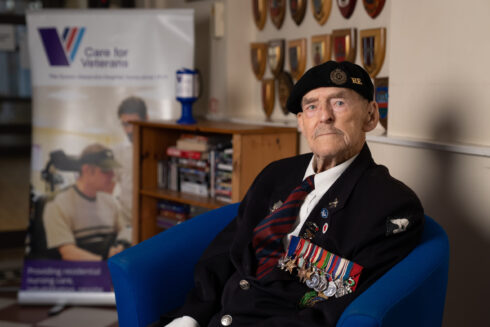 Major Edwin ‘Ted’ Hunt recently shared his childhood memories for a campaign to launch the 1921 census by www.findmypast.co.uk. They have kindly allowed to to use this video.

In March 2022, Ted celebrated his 102nd birthday. A special concert from The Not Forgotten’s Swingtime Sweethearts was held in the Care for Veterans’ Wellbeing Hub. Here are a few clips from the event.