A group of care home residents, staff and war veterans have joined forces to release a historic single in aid of charity.

My Bonnie Lies Over The Ocean is available to download from Friday (28th June) after the residents and staff of Agincare’s Fulford Care & Nursing Home recorded the single, which was originally released in the late 1700s.

Chichester-based radio station Spirit FM is also behind the release of the song which has been covered by the likes of Ray Charles and The Beatles in the past.

The downloads will raise money for the Care for Veterans charity in Worthing and the Littlehampton Armed Forces and Veterans Breakfast Club.

Stewart Gillespie from Care for Veterans said: “We’re honoured that Care for Veterans has been chosen as one of the charities to benefit from this special single, especially as this year, we celebrate 100 years of caring for our nation’s veterans.

“We’re extremely grateful to both Fulford Care Home and Spirit FM for organising this initiative; it’s a fantastic idea and we’re delighted to be involved. As well as raising vital funds for both charities, it will also create awareness of the important work that we do.”

Care for Veterans is a registered charity, providing care and rehabilitation for physically disabled ex-Service personnel and their families. Many have Acquired Brain Injury and some have neurological disorders such as Parkinson’s or Multiple Sclerosis. Others are paralysed or do not have use of their limbs and some are terminally ill. The charity supports an average of 140 residents a year.

Kim Maw, Registered Manager of Agincare’s Fulford Care & Nursing Home “At Fulford we are very much part of the local Littlehampton community and we wanted to support the 75th anniversary of the D-day by raising funds for local veterans.

“With the support of musicians who regularly entertain our residents, the whole community at Fulford has come together to sing My Bonnie Lies over the Ocean which is a favourite here at Fulford.”

Stuart McGinley, Content Director at Spirit FM added: “Spirit FM is immensely proud to be supporting this initiative, which will help raise funds for vital support for our armed forces veterans.

“The sacrifice they have given during conflict is still valued to this day and it’s a pleasure to be working alongside them for this project.”

The single will cost 99p to download via Spirit FM’s TicketCrowd website from Friday (28th June). Proceeds will go to Care for Veterans and the Littlehampton Armed Forces Veterans Breakfast Club. 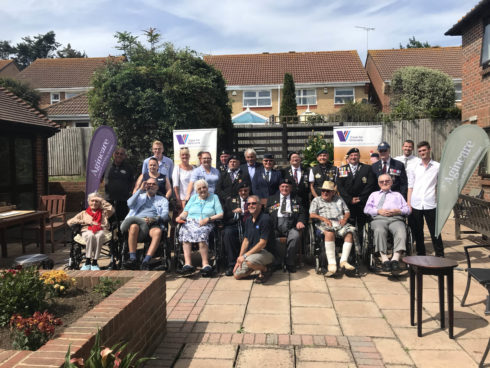